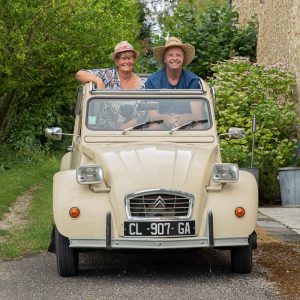 We are Cees Heijstek and Annelies Magré, and since October 2015 we are the proud owners of Le Paradis.

Cees was born in Oss (The Netherlands) in 1965, and moved to Voorburg during his primary schools years. Here he followed the MTS after the Mavo, and when his parents went back to Brabant, Cees decided to stay in The Hague. After the MTS, he went to work for Philips, first in the Service department for consumer electronics, and then in the Service department for business automation. Apart from a small excursion to TU Delft (department of Nanotechnology), he has always worked in this sector and survived various company takeovers, outsourcing and reorganisations.

Annelies was born in 1967 in Elburg (The Netherlands), and after her VWO-diploma first lived for a few years in Utrecht. In 1989, she went to the HEAO in The Hague and after that she had a number of financial-administrative functions at various companies, including the very special location Slot Loevestein.

In 1989 we met through the roommate of Annelies, and since 1990 we are “a couple”. In 1994 we started living together, first in The Hague, and soon in two different places in Voorburg. In 2008 we left the busy Randstad area, and found a very nice dike house on the dammed up Maas in Aalst in the Bommelerwaard.

In our spare time we have done a lot of voluntary work, especially at rowing club De Laak in The Hague, at theatre De Tobbe in Voorburg and at the Alfa Romeo Spider Register. We have also made some beautiful and far away trips, with the highlight of the Cabrio Challenge in 2007: a drive from Amsterdam to Singapore with our Alfa Romeo Spider from 1978. An experience never to forget!

During our holiday in New Zealand in 2005 we stayed in some B&B’s for the first time, and then we said to each other: “That’s nice, that would be something for us too!”. But as it usually goes, once back in the Netherlands, the idea diluted. Until, a few years later, a friend introduced us to a B&B in the South of France. The flame slowly started to burn again, and when both our jobs became more and more precarious in 2012, we decided to get serious about it. The search eventually brought us to the Paradise, and here we have been enjoying ourselves immensely since 2015!